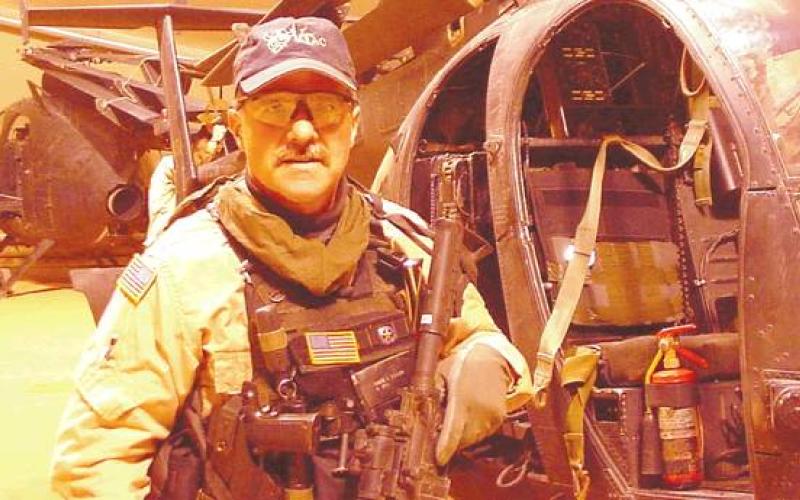 BY:
WILL SADLER, OLNEY ENTERPRISE PHOTOJOURNALIST

Recently appointed to the Young County Emergency Management Coordinator (YCEMC) position, Greg Coker brings more than just a wealth of experience, expertise and knowledge to his new role. Primarily, Coker is responsible for emergencies that occur within the county such as natural or man-made emergencies, which could be a fire, tornado, active shooter or hazmat spill, to name a few.

Coker helps law enforcement and first responders coordinate large events falling under the National Incident Management System (NIMS), which is the first-ever standardized approach to incident management and response that was developed by the Department of Homeland Security and released in March 2004. NIMS establishes a uniform set of processes and procedures that emergency responders at all levels of government use to conduct response operations.

A valued member of the armed forces of the United States, Coker retired from the Army as a Chief Warrant Officer 4 where he piloted helos for several years. In the latter years, he piloted Cobra and Apache Helos. After completing special operations training at Fort Campbell, he joined the 160th Special Operations Aviation Regiment (SOAR) where he had an opportunity to fly the AH-6 Little Bird, which is a lightweight helicopter gunship reserved for special operations. Coker served our country with dedication and pride in such places as Afghanistan and Iraq among other tours of duty until his retirement in 2008.

Coker donates his time and expertise as a helo pilot along with other skills to help veterans at the Young County Warriors Ranch located in Graham Texas. The 20-acre ranch is a nonprofit organization that brings veterans together to enjoy hunting, fishing and fellowship. The ranch has a big pond for fishing, a bunkhouse that can sleep approximately 18, a small range and a large building for special events. The ranch is always open to Veterans 365 days of the year to bring their families or to enjoy solo. The ranch is much more than just a retreat or place to unwind, said Coker. Veterans are most comfortable talking and sharing with other veterans, and the ranch provides the platform to facilitate this desire. For additional information about the ranch, visit the Facebook page using the email: [email protected]).

Annually, usually in March, the ranch hosts a hog hunt on a helo for approximately 24 veterans from all over the country. Invitees include active duty military, retirees and veterans. Coker said he enjoys watching the guys come in on the first night, which is usually a Thursday. And he said he enjoys watching their transition through that weekend as they unwind and relax. “The weekend is a weekend of friendship. The organization is a faith-based program that helps form friendships and allows the veterans to fellowship in a trusting environment. God Bless America,” Coker concluded.

The then 16-year-old Taft Union student was shot in the chest by a classmate in 2013 and still deals with lead pellets that remain embedded in his body.

On Wednesday, a Kern County, California, jury awarded $3.8 million to a man who was shot in his science class at Taft Union High School in 2013.

The jury found the district 54% negligent, meaning it must pay 54% of the $3.8 million reward, totaling $2,052,000. Cleveland’s attorney, Daniel Rodriguez, had originally requested $45 million for his client.

Rodriguez argued the district ignored red flags, including threats and disturbing drawing, regarding the shooter, Bryan Oliver, who brought a gun into school and shot Cleveland in the chest.

He also detailed the seriousness of Cleveland’s wounds and how he faces a lifetime of medical issues and has undergone several surgeries.

“It’s been a long journey for Bowe and his family,” Rodriguez said. “I’m very proud of Bowe because he battled back from devastating injuries and also because he continues to work on being a survivor and not a victim.”

He hopes the verdict serves as a “wake-up call” for other school districts.

Leonard Herr, the district’s attorney, argued it was impossible for the administrators to know Oliver was going to bring a gun into school.

“Our entire community has felt the pain of Bryan Oliver’s actions since he made the decision to shoot Bowe Cleveland in January of 2013. There are simply no winners in this case,” District Superintendent Blanca G. Cavazos in a statement said. “While we continue healing as a community, over the past few years, we’ve also learned and grown in our approach to ensure the safest learning environment for our students, staff and faculty.”

Along with the district, the jury also found six district employees negligent.

Oliver is serving a prison sentence of 27 years and four months and is eligible for parole in 2027. He claimed at his trial that Cleveland and another student had bullied him.

I’m interested in hearing your opinions and thoughts on this verdict.

Do you feel the schools should be held responsible?

Does this pave the way for schools to just expel any student that is slightly angry or violent for fear they my do something in the future?

For a little more than a year, Texas County’s emergency management director (EMD) has been Licking resident Clinton Schwarz.

A native of Minnesota, Schwartz entered the military right out of high school and became a chemical, biological and radiological defense specialist. He was stationed at Fort Leonard Wood in 2013 and retired last year after working there as a CBR instructor.

Schwarz is currently enrolled at Missouri University of Science and Technology in Rolla and is pursuing a degree in civil engineering, with a minor in explosives. He is married, and he and his wife, Jessica, have a daughter who will also be attending Missouri S&T beginning this fall and a son entering ninth grade.

Schwarz said his primary role as county EMD is to act as a liaison between the citizens, the county and the state with regard to securing financial assistance for disaster relief. He said it’s crucial for people to report damage following a disaster because the state has a monetary threshold that needs to be reached before relief funding can be distributed.

“I want people to give me a heads-up,” Schwarz said, “because I won’t know to report to the state that we may have met a threshold if nobody’s calling me.”

“Hopefully, I never have to do my job,” he said, “but I’m here for the people to help figure out what to do if something happens that we don’t want to have happen.”

How States Are Changing the Face of Emergency Management

Every disaster or emergency presents a challenge to emergency managers – what resources to commit, who is needed to respond, when to pull what levers for support, where to put people, and how to recover. Lessons from past events inform how we respond to future emergencies but are only part of the equation. As emergency managers, we need to look at innovative methods, technologies, and tools to prepare for disasters and make our communities more resilient. It takes a village, and our roles are unique in that we work every day to pull that village together.

Part of how emergency managers innovate and improve is through networking, identifying best practices, and working with our counterparts across the country to learn from one another. The National Emergency Management Association (NEMA) is one organization and gathering that allows emergency managers to do just that. Meeting annually, the group allows members to come together and examine recent disaster response and recovery operations and talk about the ways we are preparing for the next one. The same is true of public information officers in emergency management. From July 17-18, the Federal Emergency Management Agency (FEMA) Region III office in Philadelphia is hosting the annual NEMA PIO Meeting to share skillsets, identify new opportunities for growth in the field of public information, and develop new practices to take back to our jurisdictions for the next emergency.

In preparation for this meeting, FEMA asked our state counterparts in emergency management to answer a simple question: How is your state changing emergency management? By pulling together these responses, our hope is to show the progress we are making and the change in focus across the nation on emergency preparedness. Not only looking at what went right in an emergency, but what we are doing before the next one to prepare our communities. Whether it’s unique websites, school curriculum programs, or a focus on exercises and training (to name a few), every day new things are being done to help prepare for tomorrow’s emergency. One disaster can affect a community forever, and our job has never been more important, but we continue to make strides in how well we can respond. Our communities, families, and nation depend on it.

And with that, we are proud to share how FEMA and our state partners are changing emergency management.